Today marks another day for the Blog Blast for Peace.

A day to talk about peace? Sounds like a good idea to me, especially on a day that so many people in the western world mark as a day to remember a terrible battle, fought so long ago.

On June 6th, 1944, soldiers, sailors, and airmen from the nations allied against Nazi Germany, assaulted Adolf Hitler's "Fortress Europe", by invading France via the beaches of Normandy. It was the first hammer blow at the Atlantic Wall of the Nazi empire, and by the time the first day of the battle was over, thousands of people were dead.

It was the beginning of the end of the second world war.

Today, as I sit here in our home office, looking out over my suburban neighborhood, my thoughts aren't of war, but of peace. Not peace, as in the cessation of combat, although I fervently wish that could be achieved in the world... no, I'm talking about the kind of peace that we can create in ourselves and help to create for others.

In my view, peace starts with the self. It is an internal thing that is achieved by introspection, and acts, both small and large, performed by one individual for another. Once achieved, this peace can be passed on to others.

A few weeks ago, I told you about my first marriage, and the repair of my relationship with my oldest daughter. Closing that gap meant, for me, that my own, personal circle of peace was nearly closed.

I wish I could be more eloquent, but my skills fail me.

Working for peace is easier than you might think. You needn't be a diplomat, or a member of the clergy, or a professor, or a parent, or a policeman.

All you need is the desire.

Go say hello to a stranger. Smile at someone. Plant a tree or flower. Help someone. Tell someone outside of your family that you love them. Sing or dance. Dance. Put down a feud with your noisy neighbor. Sit in silent prayer. Determine to be less contentious.

In the church, my church, anyway, there is a part of the service where we "pass the peace", taking a moment to greet each other in God's name with a handshake and the greeting of "Peace Be With You". I know that many of you who read this aren't of my particularly religious persuasion, but my wish for you doesn't change.

Peace Be With You. 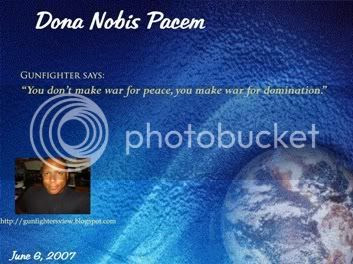 Posted by Gunfighter at 8:19 AM

You are so wise, O Gunfighter.

Thank you for that wonderful reminder. I think I try every day, but there are always ways I can improve.

Peace is a choice each person makes each moment of the day, be it inner peace or peace with others, but you have to MAKE that choice.

Last year, we took a trip to see the D-day beaches. It was an exceptionally powerful thing to stand on the shore and REMEMBER.

So well said today Gunfighter. We have so much to do inside ourselves.
Here's to moving that work forward!

And in my church, we say in response to the priest's greeting of "Peace be with you," "And also with you."

He then says, "Let us offer each other a sign of peace."

So, peace be with you my brother in Christ.

I love this song! One of my favorites. Thanks for reminding me. I was going to put it on my blog for BlogBlast for Peace. I shall do it tomorrow.

Your globe is lovely! What a great post. Insightful. Thanks for participating and becoming a new member of the peace globe train.

I will place your globe in the gallery with a link to your post.

and also with you!